The element is connected by a capillary tube with a sensor (2), a valve housing with valve seat (3) and a spring (4).

Mode of action of a thermostatic expansion valve

The function of a thermostatic expansion valve is determined by three basic pressures:

Sensor pressure that acts on the top of the diaphragm and opens the valve.

Evaporator pressure acting on the underside of the diaphragm and closing the valve.

Spring pressure, which also acts on the underside of the diaphragm and closes the valve.

The static overheating is set by means of the spring. 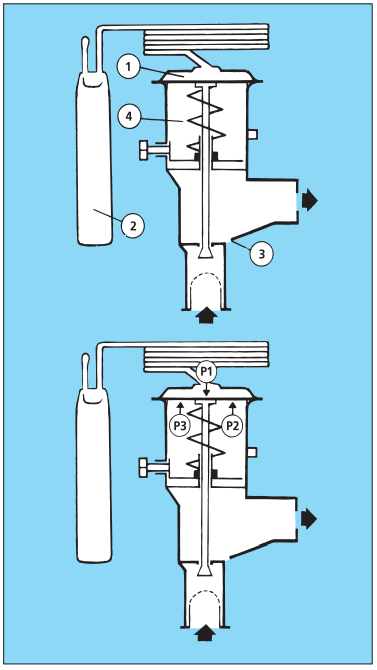 Overheating is the difference between the temperature measured at the sensor of the thermostatic expansion valve and the evaporation temperature.

The evaporation temperature is determined via pressure gauges on the suction side.

Overheating is indicated in Kelvin [K] 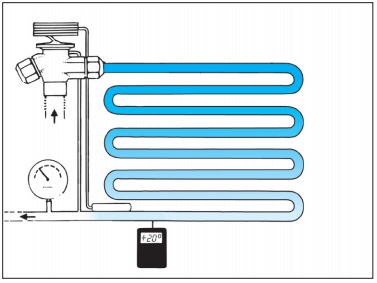 The subcooling is defined as the difference between liquid temperature and condenser pressure / temperature at the inlet of the expansion valve.

The subcooling is given in Kelvin [K]. Hypothermia of the refrigerant liquid is necessary to avoid vapor bubbles in front of the expansion valve.

Steam bubbles reduce the performance of the expansion valve or reduce the liquid supply to the evaporator. A supercooling of 4-5 K is sufficient in most cases. 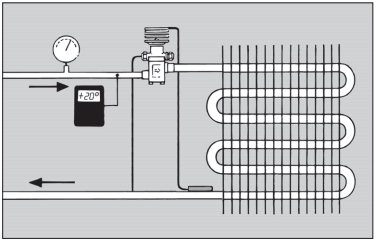 Expansion valves with external pressure equalization must always be used when using liquid distributors. The use of manifolds generally results in a 1 bar pressure drop across the manifold and manifold.

Expansion valves with external pressure equalization should always be used in refrigeration systems with large evaporators or plate heat exchangers. 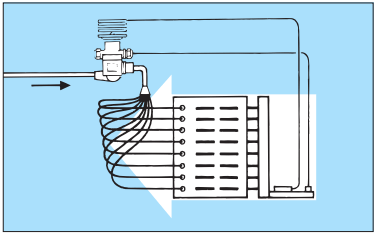 A thermostatic expansion valve can have three different fillings: 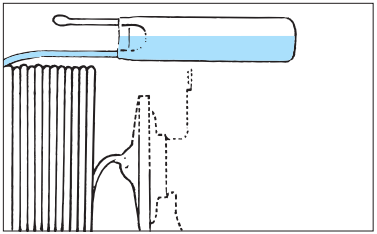 This means that the thermostatic element has to be warmer than the sensor. Otherwise, a charge shift may occur from the probe to the element, which inhibits the function of the expansion valve. 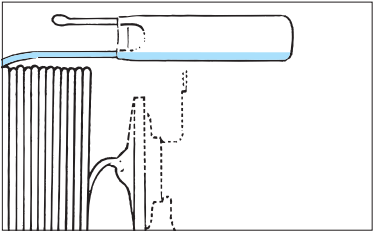 With the MOP ballast filling, 2 to 4 K less overheating can be achieved than with other types of filling. 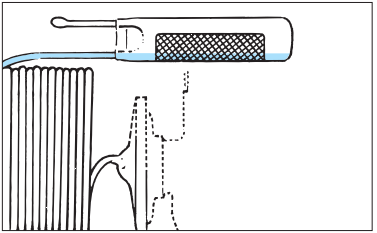 The thermostatic expansion valve may be determined if the following is known:

The thermostatic element is provided on the top with a shield. The letters refer to the refrigerant intended for the valve: 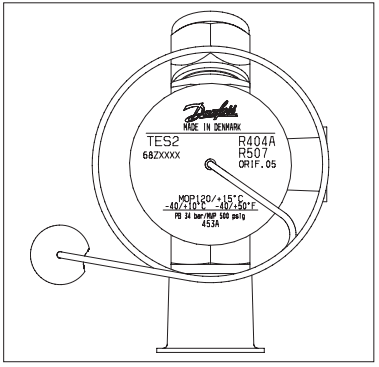 The number of the nozzle insert is also indicated on the lid of the plastic container for use.

For TE 5 and TE 12, the upper marking (TE 12) indicates for which valve type the insert is intended. 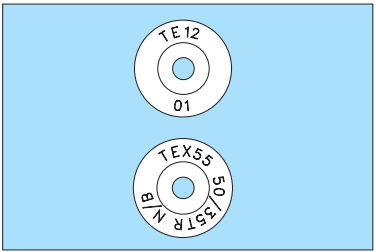 The expansion valve must be mounted in the liquid line in front of the evaporator and its sensor mounted as close as possible to the suction line behind the evaporator.

In the case of external pressure compensated valves, the equalizing line must be located immediately near the sensor on the suction line. 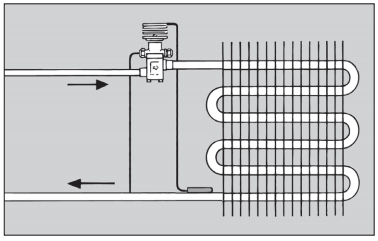 The sensor is mounted on a horizontal pipe on the suction pipe, in a position that, when compared to the dial of a clock, corresponds to the time between 1 and 4 o'clock. The attachment depends on the outside diameter of the pipe. 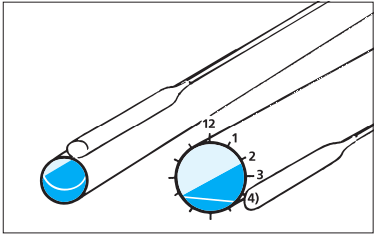 The sensor should determine the temperature of the superheated suction steam and must therefore not be installed so that it can be influenced by external heat and cold.

The Danfoss sensor clamp allows a firm and secure mounting of the sensor on the pipe. This ensures that the sensor has the best possible thermal contact with the suction line. The TORX design of the screw makes it easy for the installer to transfer the torque from the screwdriver to the screw without forcing the tool into the notch of the notch and damaging the notch. 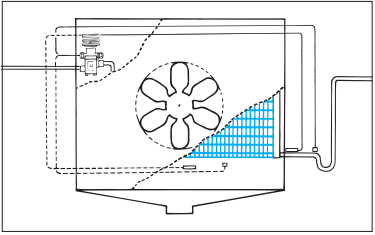 The sensor should not be mounted behind an additional heat exchanger as this attachment will result in a distorted signal to the expansion valve. 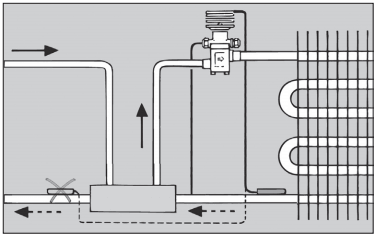 The sensor should not be installed near large components as this will also result in a distorted signal to the expansion valve. 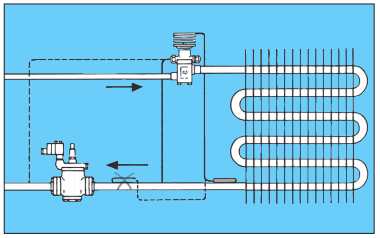 The sensor is, as mentioned above, to attach to the horizontal part of the suction pipe immediately behind the evaporator and must not be mounted on a manifold or riser behind an oil sack. 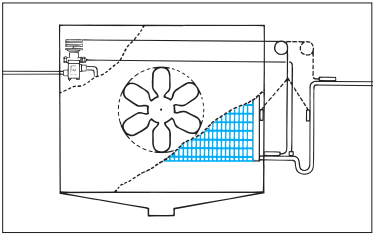 The sensor must always be installed in front of an oil lifting bow. 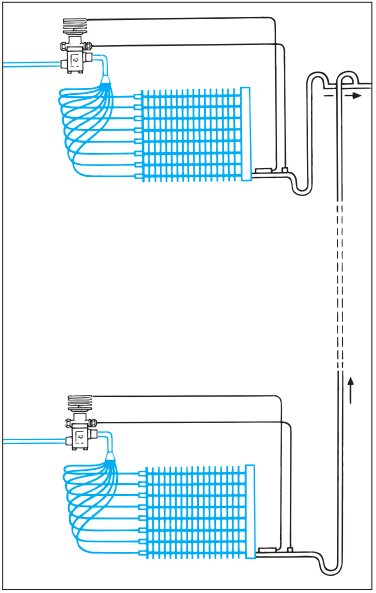 The expansion valve comes with a factory setting, which in most cases does not need to be corrected.

If a readjustment is necessary, this is done by means of the adjusting spindle on the expansion valve.

Turning clockwise increases the expansion valve overheating and decreases it by turning it to the left (counterclockwise).

For T / TE 2, one revolution of the spindle results in a change in overheating at 0 ° C evaporation temperature by about 4K. 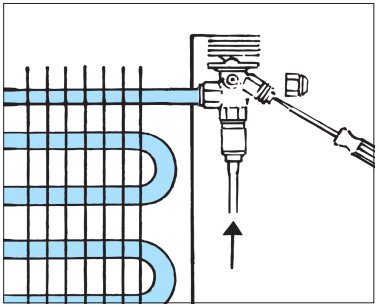 For TE 5 and subsequent sizes, one revolution of the spindle will result in a change in overheat at 0 ° C evaporation temperature of about 0.5 K.

For TUA and TUB, one revolution of the spindle results in a change of overheating at 0 ° C evaporation temperature by about 3K. 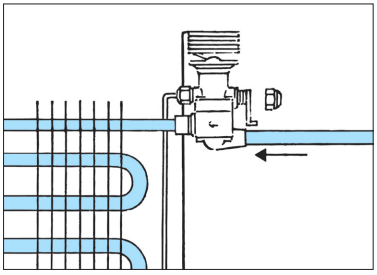 From this position, turn the spindle clockwise approximately once (but only 1/4 turn for T / TE2 valves).

The plant is no longer commuting, the evaporator is fully utilized. A fluctuation in overheating by ± 1 K is not considered as commuting. 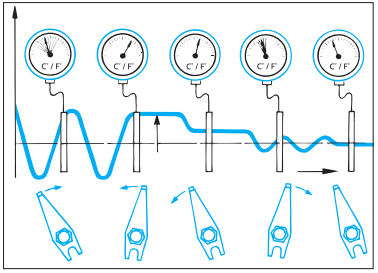 Excessive overheating in the evaporator may be due to insufficient refrigerant fluid. The overheating is reduced by gradually turning the adjusting spindle to the left until oscillation is detected.

From this position, turn the spindle clockwise approximately once (but only 1/4 turn for T / TE2 valves).

In this setting, the evaporator is fully utilized. A fluctuation in overheating by ± 1 K is not considered as commuting. 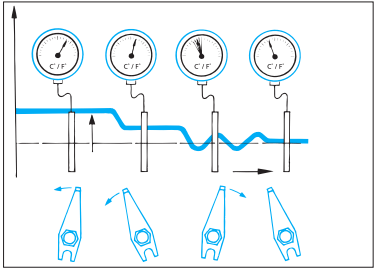 If no steady-state condition is reached in the procedure described above, the nozzle insert is to be replaced by a smaller one.

If the overheating of the evaporator is too great, the valve capacity is too low and the nozzle insert must be replaced with a larger one. 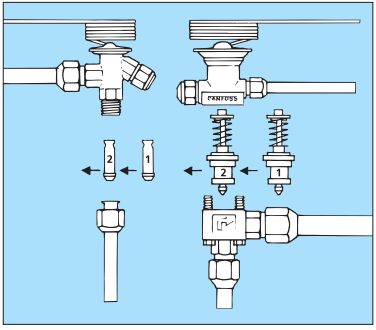 With a significant oversizing of an expansion valve, it can come to the so-called "hunting". "Hunting" is the English word for "hunt" and describes the commotion of overheating and concomitantly the suction pressure. Hunting shows that the overheating, although on average, terminates at an acceptable level, but increases constantly and then decreases again, so that the system does not reach the steady state.

The main reason for this is an oversized power nozzle. Remedy can bring the replacement of the nozzle towards a smaller capacity. However, the same phenomenon also occurs, for example, if the actual values ​​at the valve are set too small, if they are smaller than the MSS (minimum stable signal) of the evaporator.

For example, an overheat setpoint of 4K combined with a plate heat exchanger type evaporator will almost always result in commutation of overheating. A corresponding increase in the superheat setpoint can remedy this situation. 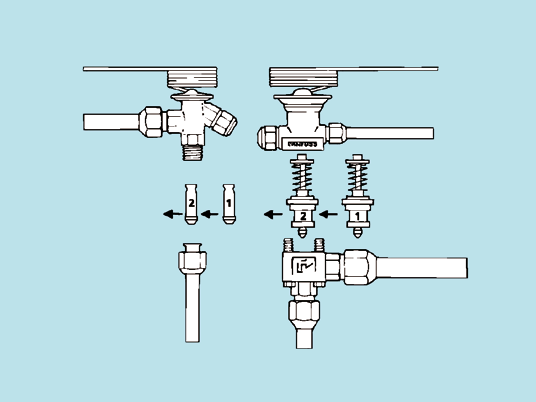 Causes of excessive overheating on the evaporator can be, for example: flash gas upstream of the expansion valve, MOP charge transfer, too small a nozzle, loss of refrigerant or sensor loss. Flash gas formation can be easily detected in the sight glass. The sight glass should be free of bubbles under normal operating conditions. With strong flash gas formation, it may be necessary, for example, to install an internal subcooler to introduce additional subcooling into the liquid reservoir upstream of the expansion valve. Supercooling is the additional sensible temperature reduction below the wet steam level at the appropriate pressure.

Example: The service manometer reads 10.6 bar. This corresponds to 45 ° C at R134a. If one measures now before the expansion valve at the liquid line 40 ° C and neglected for the sake of simplicity, any pressure drops, then there is a supercooling of 5 K (Kelvin pressure differences are always in Kelvin (K)). Flash gas is formed by partial evaporation of the liquid by overcoming differences in height as liquid riser or by pressure drops in the liquid line. MOP charge transfer can occur when the thermal head of the expansion valve is colder than the sensor.

Thus, the refrigerant of the sensor charge shifts to the colder place, in the thermal head and the sensor no liquid refrigerant is left over to vaporize and thus increase the pressure in the sensor. The "MOP restocking test" is simple: just warm the thermal head. If the problem disappeared after that, then there was a MOP-filling shift. 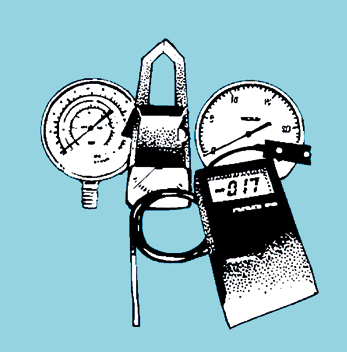 Now we come to the interpretation of an expansion valve by means of data sheet. The following classic example should be considered: a cooling chamber with 7 kW at -10 ° C evaporation, 45 ° C condensation and 10 K subcooling, the refrigerant R134a is used. For the selection of the data sheet refrigerant and evaporation temperature are crucial.

In our case this means: Use of the data sheet for R134a and evaporation temperature range +10 to -40 ° C. First, the cooling capacity must be corrected with the overcooling correction factor, which can be read on the small table below (see table "Design example" on this page above). At 10K it is 1.08. 7 (kW) divided by 1.08 gives 6.5 (kW).

Since "-10 ° C" is explicitly stated as a separate table, the appropriate nozzle size for the cooling capacity of 6.5 kW can be read directly. In addition, the pressure drop across the expansion valve is needed because the condensing temperature is not specified directly in the data sheet.

The refrigerant spool remedies this situation: Here we can see that the liquefaction and evaporation temperatures are 9.6 bar (10.6 bar - 1 bar) apart

In order to meet the pressure drop across the distributor on the evaporator, we deduct a further 1 bar from the result. This results in 8.6 bar. We are guided by 8 bar Δp, 6.5 kW cooling capacity, -10 ° C evaporation temperature and can now look for the right nozzle size. The value is 6.9 and the associated nozzle size is 5.

Thus, a "TEN 2" valve ("E" stands for external pressure equalization and "N" stands for the refrigerant R134a) can be selected with nozzle 5 for our refrigerator in this example. 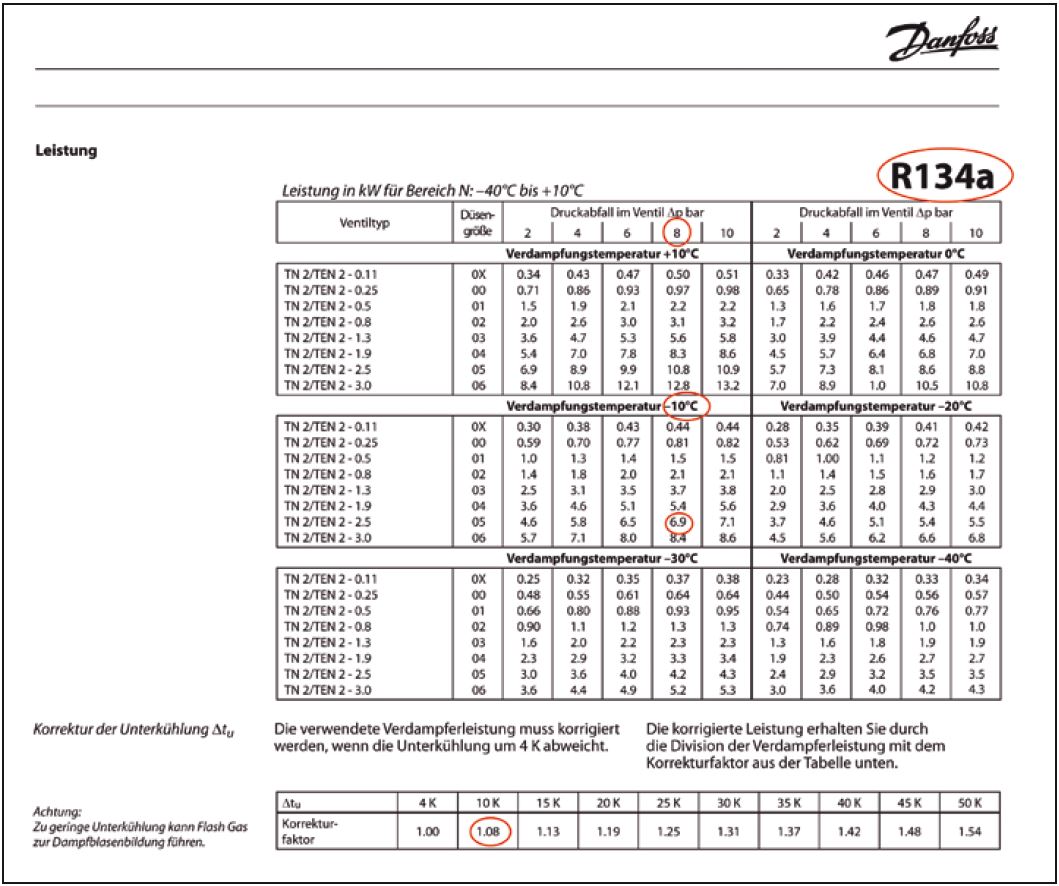 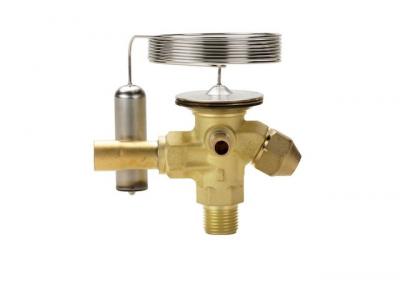 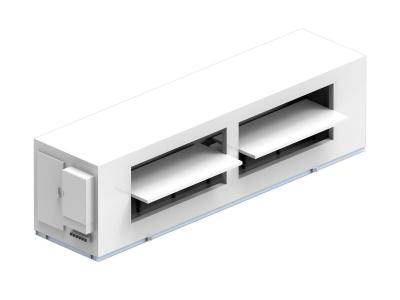