Main components of the refrigeration system

The main components of the refrigeration system simply explained

The task of the compressor is to suck vapor from the evaporator and to feed it into the condenser. The common types are reciprocating, screw and scroll compressors

The reciprocating compressor covers a wide range of performance: from the small hermetic refrigerator compressor to the large 8-12 cylinder model for industrial applications.

In larger systems, the semi-hermetic compressor is often found. Its advantage is that the axle does not have to be sealed against the engine. If a leak occurs in such a seal, it is very difficult to replace. However, this principle can not be used in ammonia plants because ammonia attacks the motor windings.

Larger size compressors and all ammonia compressors are designed as "open" compressors; ie with the engine outside the crankcase. The drive energy can be transmitted by means of a crankshaft or a V-belt.

For special applications there are oil-free compressors. In general, however, the lubrication of bearings and cylinder walls is essential. In large refrigeration compressors, the oil is circulated by means of a pump. 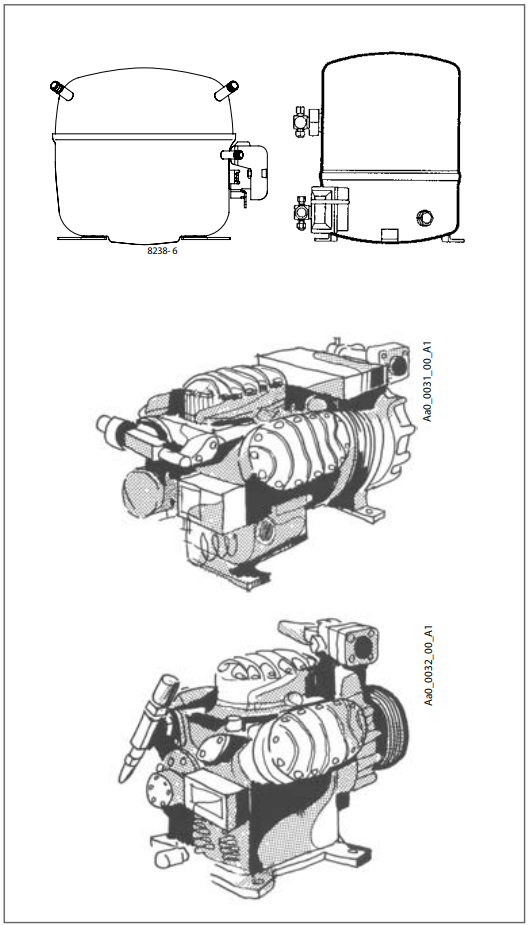 The purpose of the condenser is to remove the amount of heat, which is composed of the heat of vaporization and the energy supplied during the compression. There are a large number of different types of disposables.

Bundle tube condenser: This type of condenser is used when sufficient cooling water is available. It consists of a horizontal pipe jacket with welded inlet and deflection plates, which support the inner tubes. The two end covers are fastened by bolts and pipe jacket. 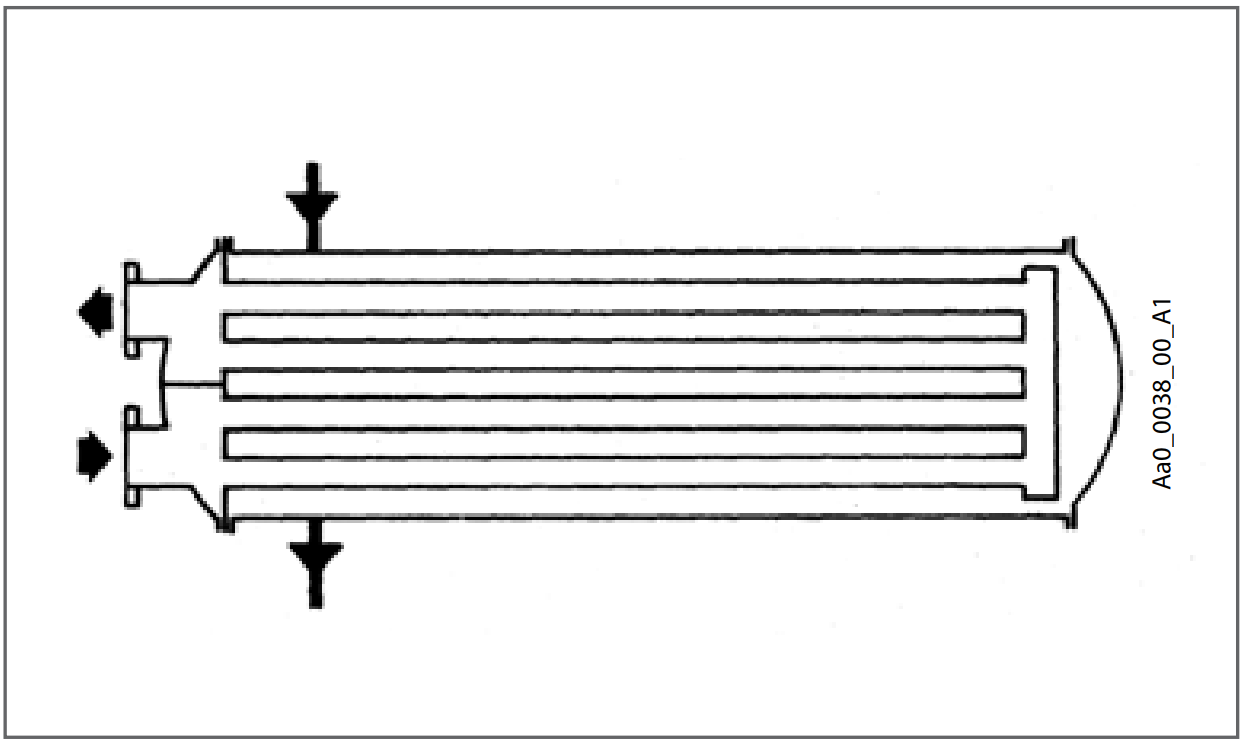 If a reduction of the circulated amount of water is desirable or even necessary, a Verdunsterverflüssiger can be used. This type of condenser consists of a housing with built-in condenser coil, water distribution pipes, mist eliminators and fans. The gaseous refrigerant enters at the upper end of the coil and leaves it at the bottom

End in the liquid state. From manifolds mounted above the coil, water is sprayed through nozzles onto the coil, after which it falls down into the drip tray. Fans provide a powerful, upward-directed airflow. The heat of evaporation required for this is removed from the refrigerant, which begins to condense with it.

The principle of water evaporation is also used in the so-called "cooling towers". They are used in conjunction with bundle tube condensers. The cooling water then circulates between these two units. The cooling tower is basically constructed like an evaporative condenser, but instead of the liquefaction heat exchanger it is a register

installed for droplet separation. Air heats up during its flow through the cooling tower in countercurrent to the falling water. The heat absorption takes place primarily by evaporation of a part of the circulated water. The evaporated water is no longer available to the cooling circuit and must be replaced by make-up water.

In cases where water is not available to remove condenser heat, the use of an air-cooled condenser is recommended. Due to the poorer heat transfer properties of air compared to water here is a large external heat transfer surface necessary. By using fins or ribs mounted on the condenser tubes, as well as a sufficiently large air flow rate generated by fans, one achieves equivalent performance as cooling water operation.

Normally, this type of liquefier is used in commercial refrigeration. 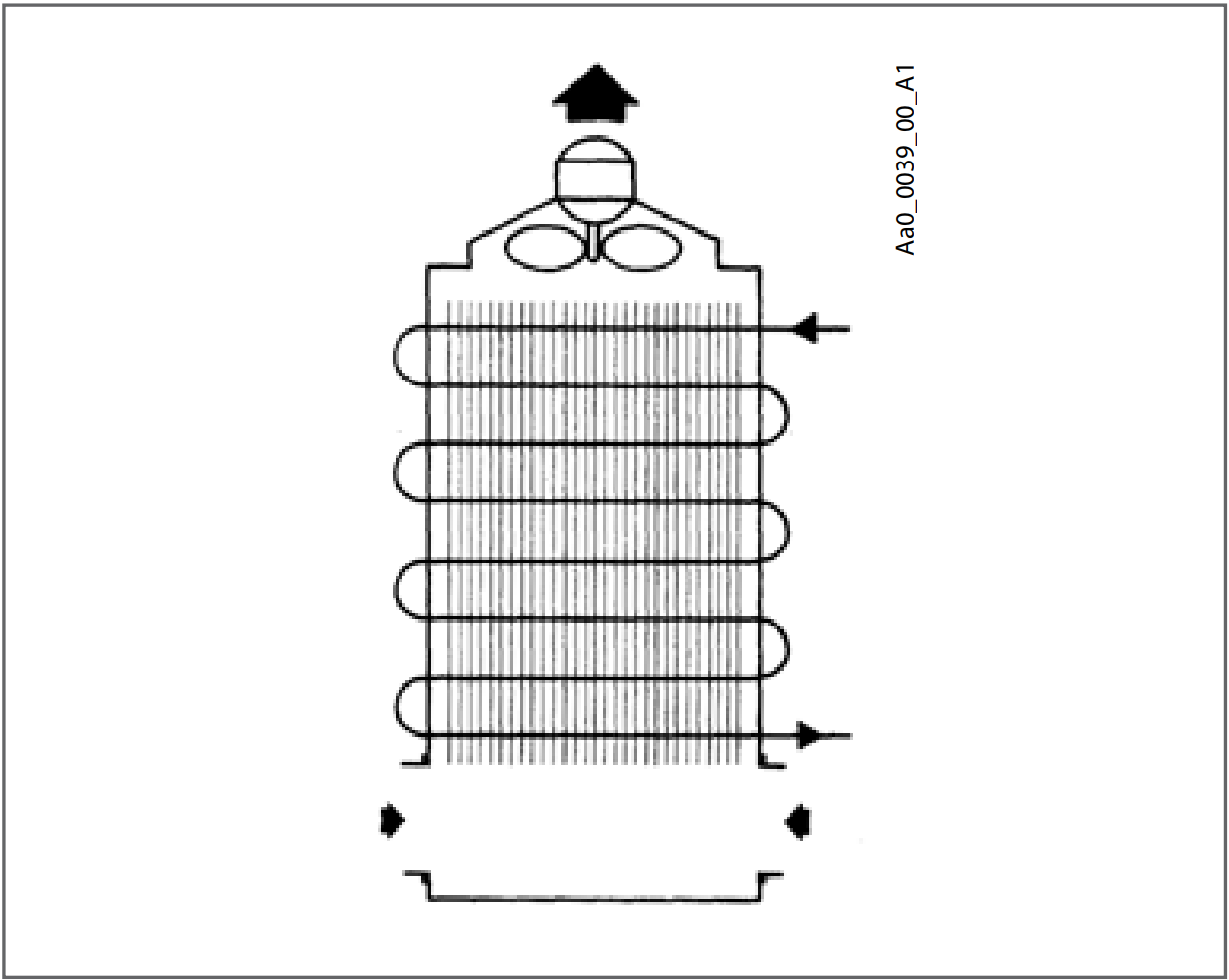 However, a capillary tube is only used in smaller, simple systems such as refrigerators and freezers, as it has no control properties. To meet this requirement, an expansion valve must be used. It consists of a housing, a capillary and a feeler. The housing is installed in the liquid line and the sensor is attached to the evaporator outlet.

The adjacent figure shows the liquid injection of an expansion valve into an evaporator. The sensor contains a small amount of liquid filling. In the remaining part of the probe, the capillary and the space above the membrane, saturated vapor is at a pressure equal to the temperature of the probe. The space under the membrane is in direct communication with the evaporator, so that the dor t prevailing pressure corresponds to the evaporation pressure. 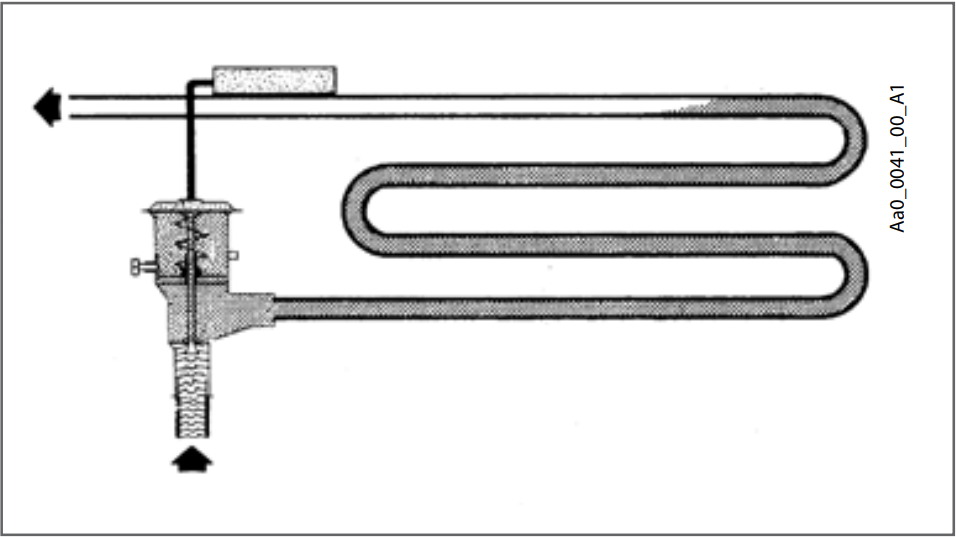 The degree of opening of the valve is determined by:

If too little refrigerant is injected, the refrigerant vapor heats up even more, which causes a temperature and pressure increase in the sensor. As a result, the membrane bends downwards and opens the valve via the pressure pin accordingly. Conversely, the valve opening decreases with decreasing sensor temperature.

There are many different versions of thermostatic expansion valves and in addition many variations of each type are made.

Depending on the application, different requirements are placed on the evaporator. Therefore, there are a variety of evaporator types.

Evaporators for natural convection or "silent cooling" are relatively rarely used because of their poor heat transfer. They often consist of ribbed pipes.

If an air flow is passed through the evaporator by means of a fan, its cooling capacity increases considerably. Due to the increased air velocity, the heat transfer from the air to the evaporator tube improves to such an extent that smaller evaporators can be used for the same performance.

For liquid cooling different evaporators are used. The simplest version consists of a coil, which is sunk in an open water tank. However, closed systems in the form of bundle tube evaporators are the most common. 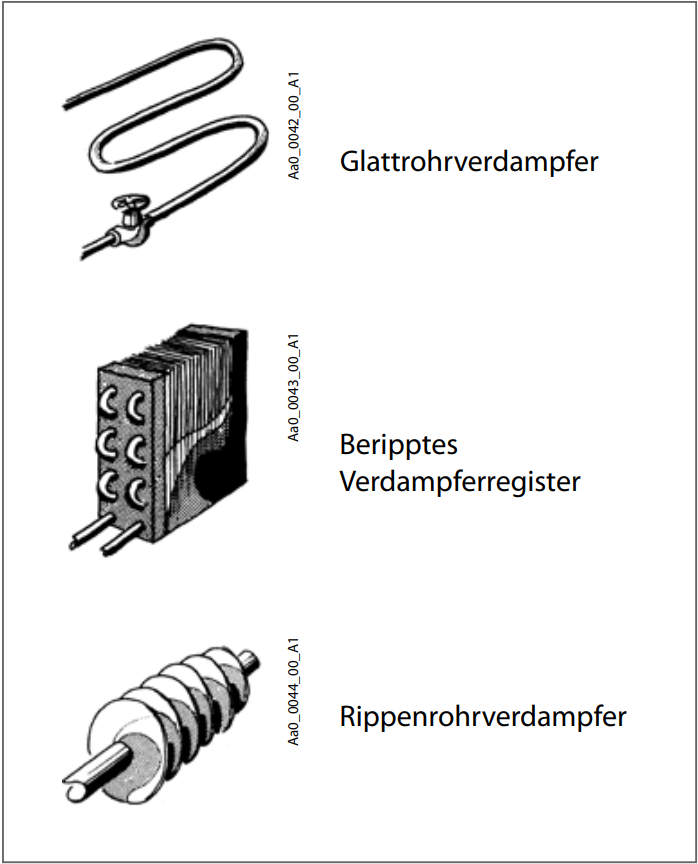 Practical structure of a refrigeration system

Figure A shows the principle of a refrigeration system for a simple refrigerator, as is often found in butchers or in supermarkets.

The condensing unit can be installed, for example, in an adjacent, ventilated room. It consists on the one hand of a compressor. An air-cooled condenser and a collector are additionally mounted on the base frame. A fan mounted on the motor shaft provides airflow through the condenser and compressor cooling. The line between the compressor and Ver liquid is called hot gas line.

From the collector leads an uninsulated liquid line to the expansion valve, which is located in the cold room directly at the evaporator inlet. The evaporator contains a tightly ribbed tube register and is equipped with a fan and a drip tray.

From the evaporator outlet, the so-called suction line leads back to the compressor. Its diameter is slightly larger than that of the liquid line, as it has to conduct large volume steam. Because of possible dripping or frosting on the outer tube, this line is usually insulated. 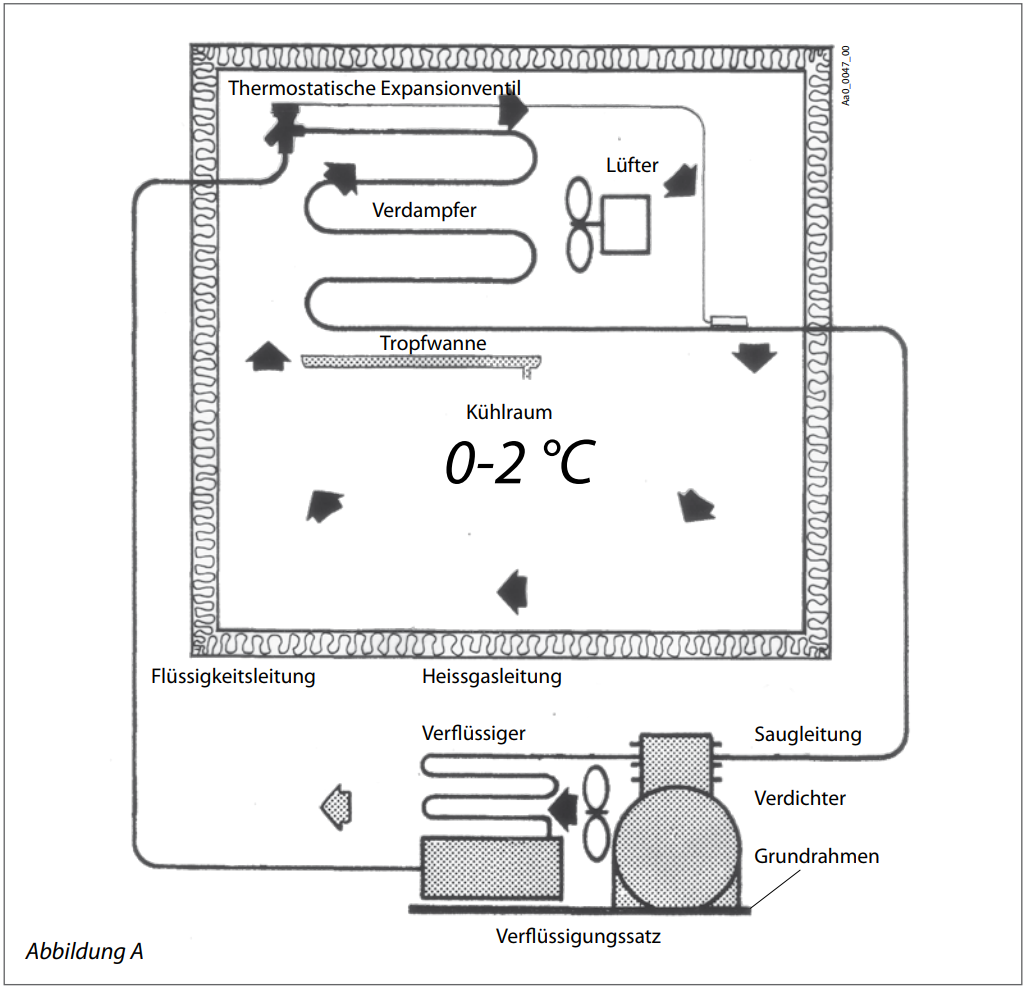 Figure B shows the current pressure and temperature conditions in such a system. At the compressor outlet there is a pressure of 7.6 bar and a temperature of 60 ° C, because it is overheated gas. In the upper part of the condenser, the temperature drops rapidly to the saturation point, which corresponds to 34 ° C at said pressure. At this temperature, the liquefaction begins.

As shown below, during the flow through the room, the air temperature changes due to the heat absorption of the stored goods, the walls, the lighting, etc. The temperature of the outside air flowing through the condenser also changes according to the season.

A refrigeration system must be designed based on your greatest load. In order to work well in the partial load range, aids are necessary. The adaptation to partial load conditions is covered by the term regulation. This task is solved by the Danfoss automatic program, which includes all necessary components for a refrigerant circuit. For a more detailed description is omitted in this document, we refer to the corresponding Danfoss literature. 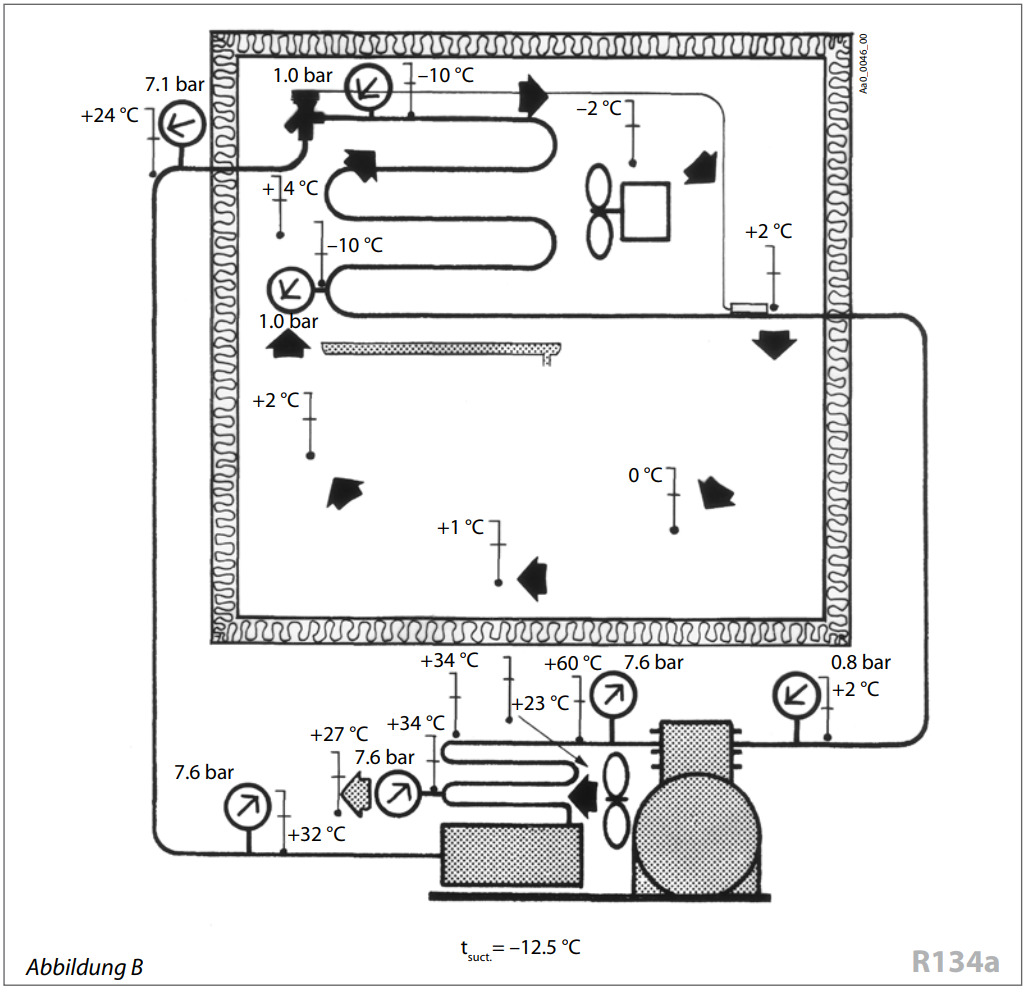 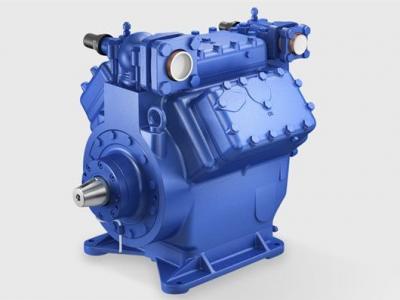 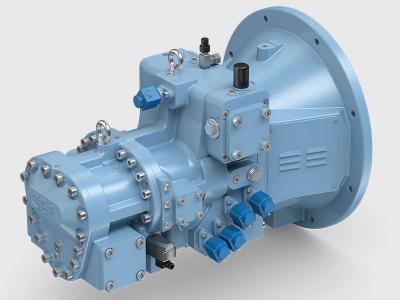 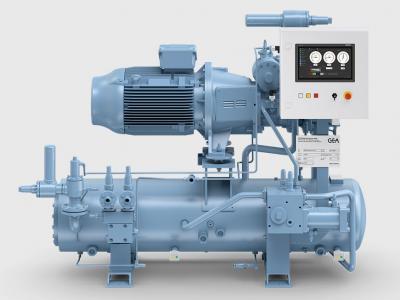 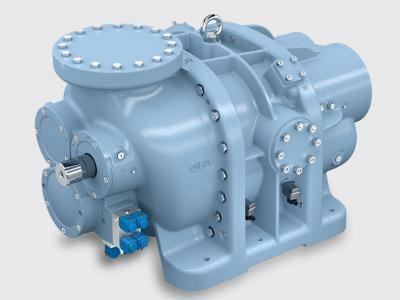 GEA Refrigeration Germany GmbH
GEA Grasso LT screw compressors
The GEA Grasso LT series is available in 16 sizes and covers displacements from 805 to 11,467 m3/h (at 2,940 rpm).
To the Product
Image 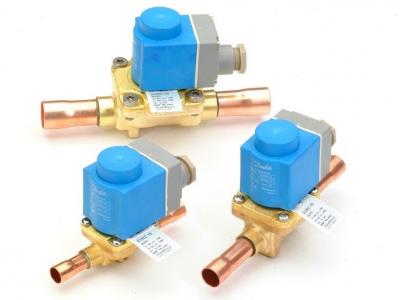 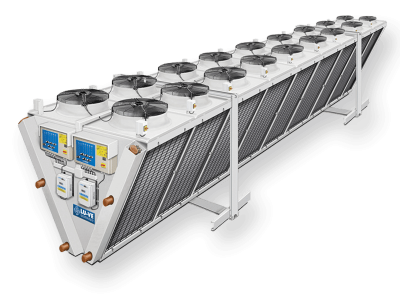 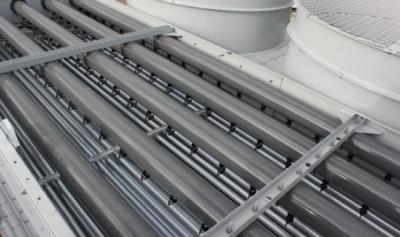