Since the mid-1950s, mechanical seals have become increasingly popular as shaft seals over the traditional stuffing box.

Components and functionality of the mechanical seal 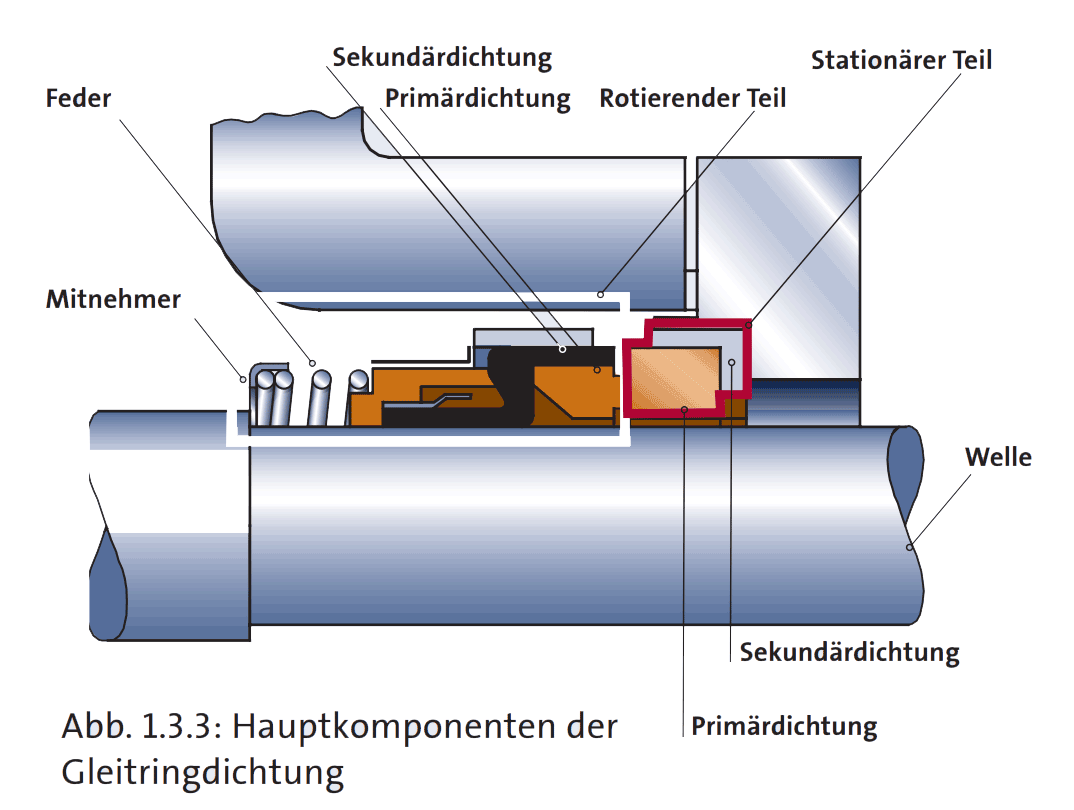 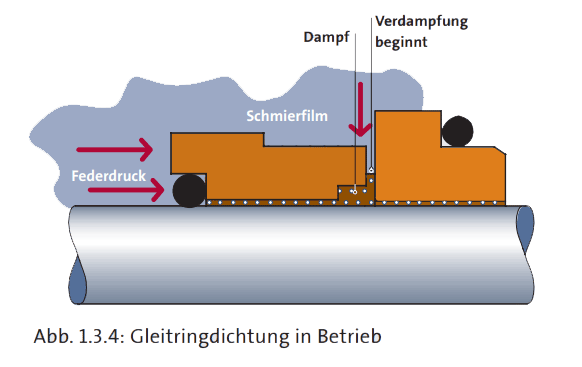 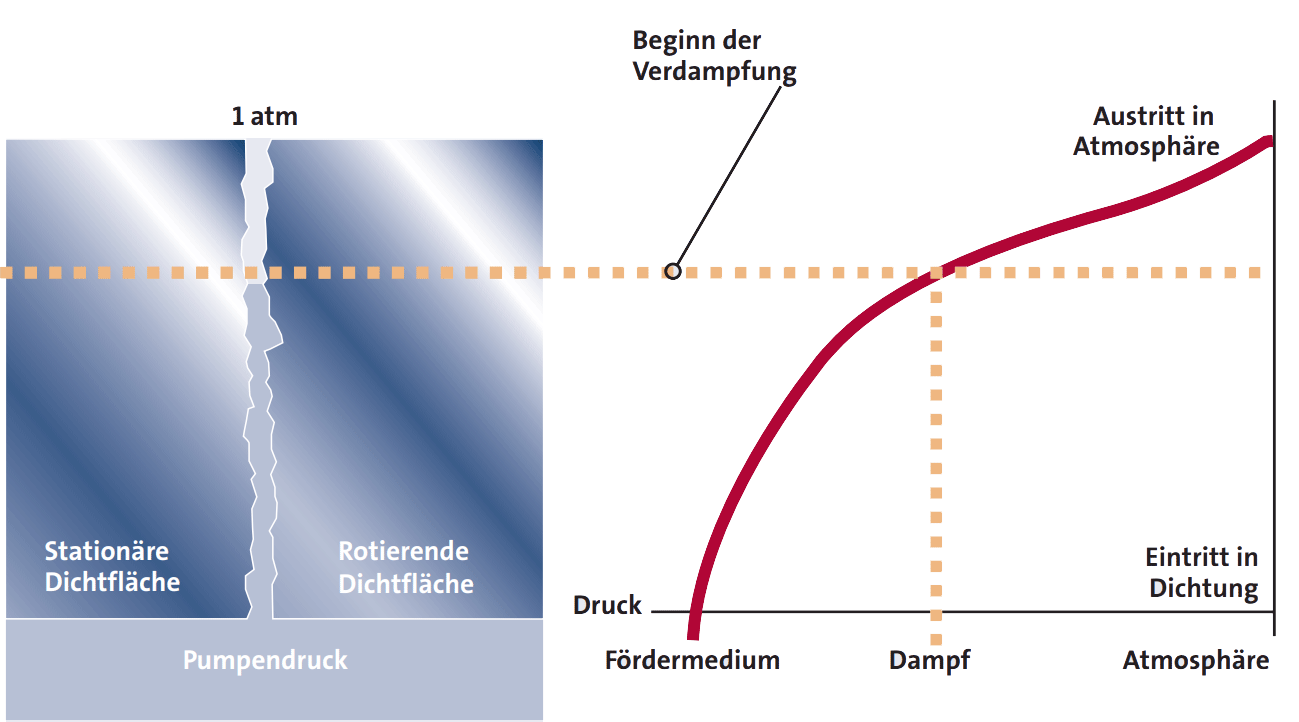 Figure 1.3.5 shows the optimal relationship between good lubrication and low leakage rate. The optimum ratio is achieved when the lubricating film wets the entire seal gap, except for a very narrow evaporation zone close to the atmospheric side of the mechanical seal.

Often leaks occur due to deposits on the sealing surfaces. When using coolants, deposits quickly build up through evaporation on the atmospheric side of the seal. When the pumped medium evaporates in the evaporation zone, microscopic solid particles from the pumped medium remain as deposits in the sealing gap and cause wear there. These deposits are seen with most types of fluids. Conveying media with a tendency to crystallize are problematic. In order to avoid excessive wear, it is best to choose sealing surfaces made of hard material (e.g. tungsten carbide (WC) or silicon carbide (SiC)).

To achieve a balanced pressure between the primary sealing surfaces, two types of seals are offered: balanced and unbalanced seals.

Figure 1.3.6 shows a relieved seal and the forces acting on it.

Figure 1.3.7 shows a non-balanced seal and the forces acting on it. 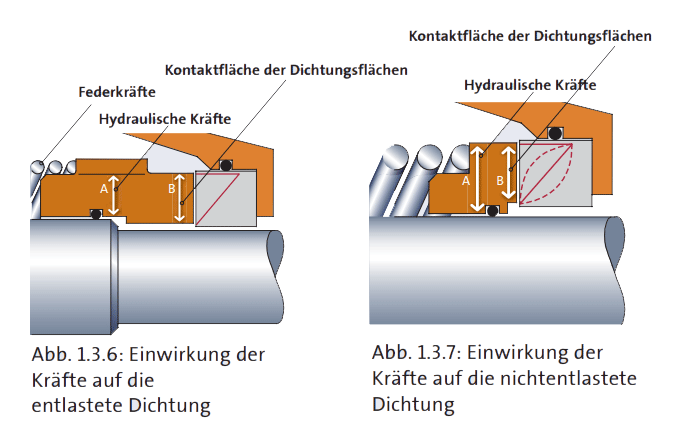 The load factor (K) of a mechanical seal is defined as the ratio between area (A) and area (B): K = A / BK = load factor A = area that is exposed to hydraulic pressure B = contact area of ​​the sealing surfaces Load factor around K = 0.8, for those not relieved around K = 1.2. 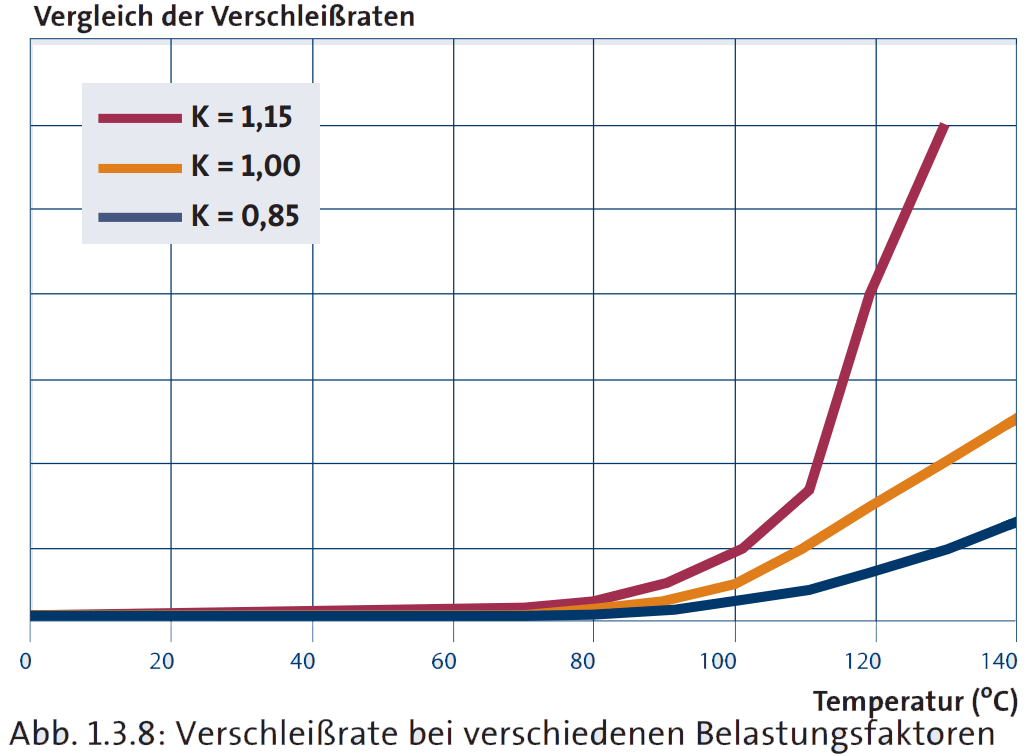 In an O-ring seal, the seal between the rotating shaft and the rotating sealing surface is achieved by an O-ring (Figure 1.3.9). The O-ring must be able to slide freely in the axial direction in order to be able to absorb the axial displacement due to temperature changes and wear. Incorrect position of the stationary seat can lead to abrasion and unnecessary wear on the O-ring and shaft. O-rings are made of different elastomers according to their operating conditions (e.g. NBR, EPDM and FKM).

Advantages and disadvantages of an O-ring seal 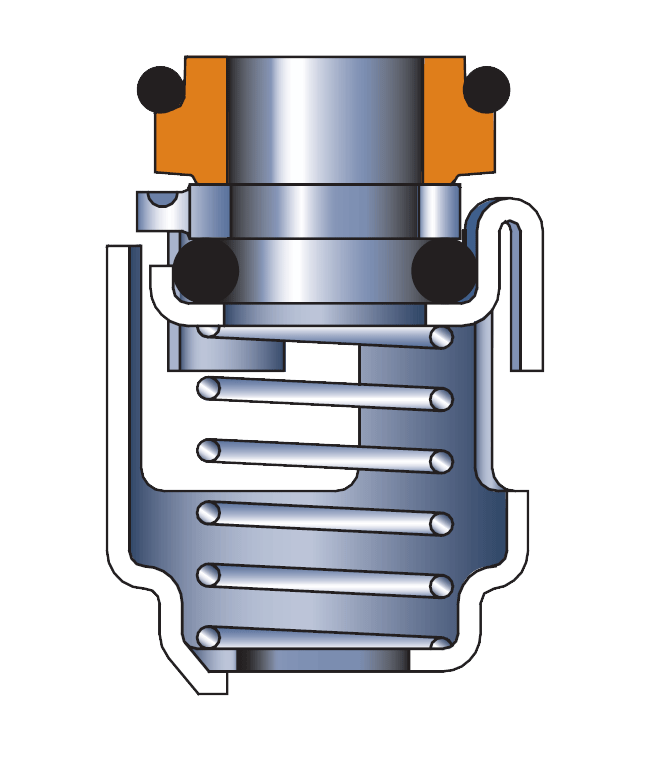 A common feature of bellows seals is the rubber or metal bellows that act as a dynamic sealing element between the rotating ring and the shaft.

The bellows of a rubber bellows seal (see Figure 1.3.10) can be made from different elastomers (e.g. NBR, EPDM and FKM) - depending on the operating conditions. Two geometrical principles are used in the construction of rubber bellows: 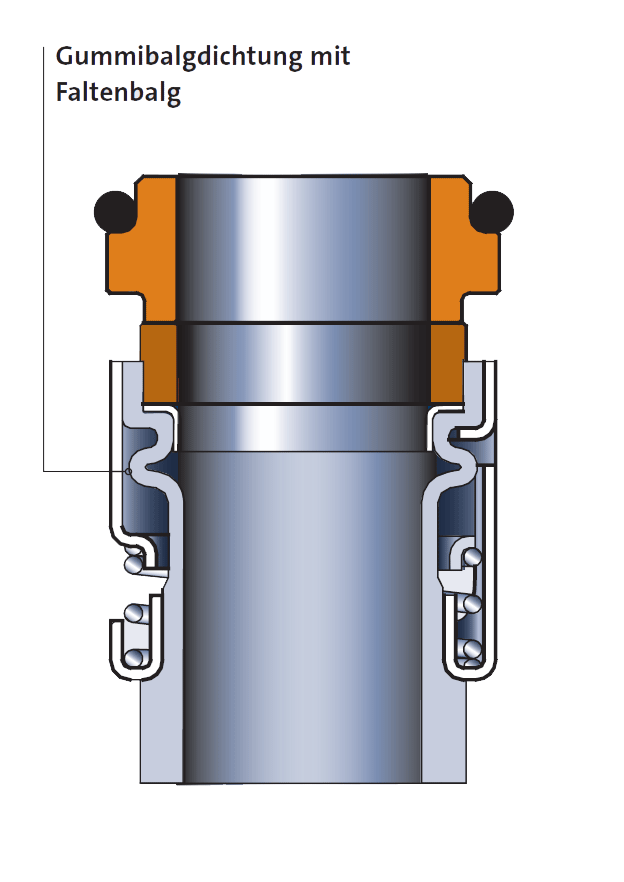 In a conventional mechanical seal, the spring generates the force required to close the sealing surfaces. In the case of a metal bellows seal (Figure 1.3.11), the spring is replaced by a metal bellows with the same force. The metal bellows acts as a dynamic seal between the rotating seal ring and the shaft and as a spring. The bellows has several folds with which the required contact pressure is generated. 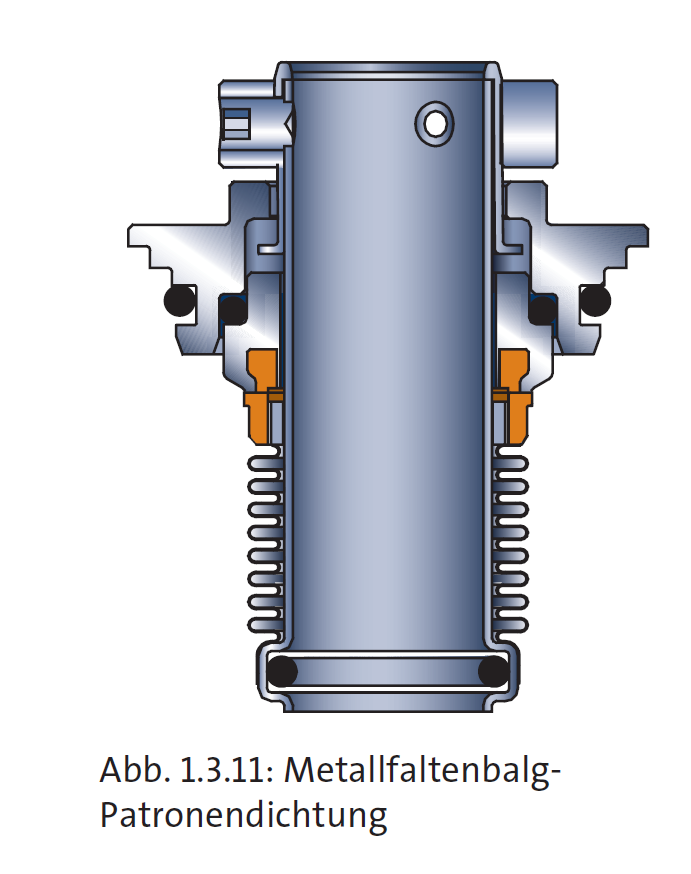 With the cartridge mechanical seal, all parts form a compact unit, which is attached to a protective shaft sleeve ready for installation. A cartridge seal offers many advantages over a conventional mechanical seal (Figure 1.3.12). 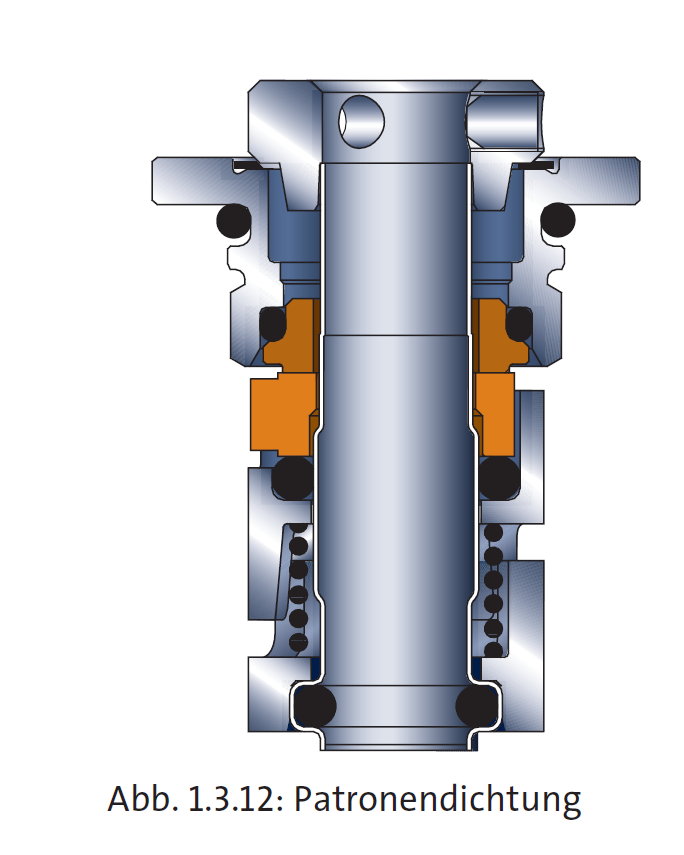 "With the kind permission of GRUNDFOS GMBH" 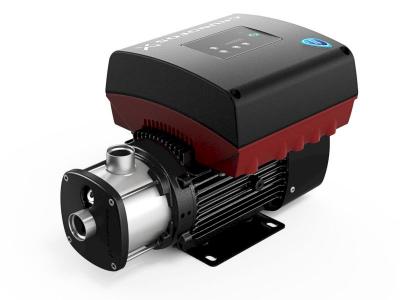 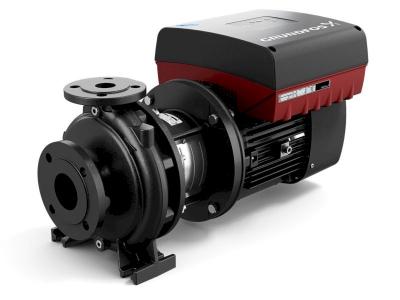 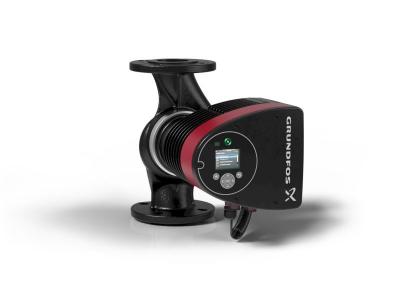 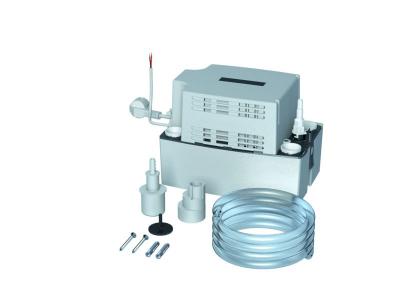 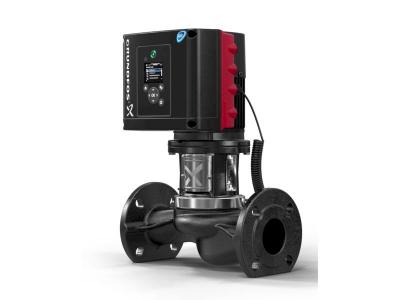 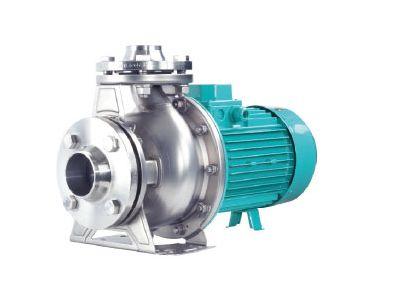 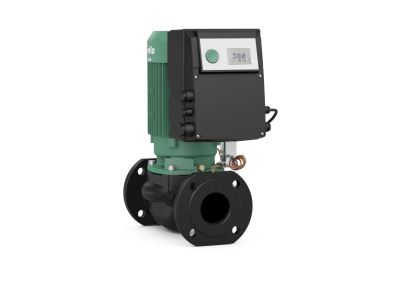 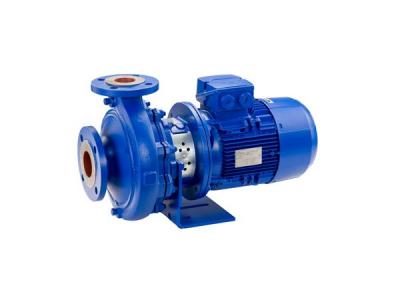 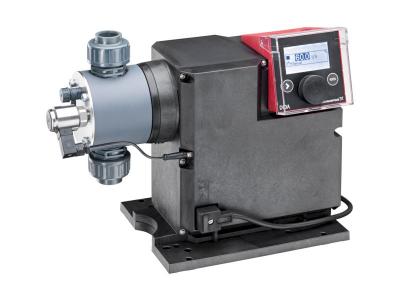