For the transmitter of a gas detection system to detect the presence of hazardous gas concentrations, the gas must reach the sensor in the transmitter as quickly as possible. The time until the triggering of an alarm is therefore determined not only by the reaction time of the sensor, but also decisively by the choice of the installation location.

Often, the rule of thumb is applied when it is determined:

In the following, we would like to show you why following this rule of thumb in many cases does not fully exploit the possible protection potential of the gas detection system or even lead to dangerous conditions. Before that we have to deal a bit with the properties of gases and vapors.

The classification of gases or vapors as lighter or heavier than air is derived from the specific weights of the pure substances. In essence, only hydrogen, methane and ammonia are lighter than air. All other substances, especially the higher hydrocarbons, are usually heavier than air.

However, the propagation mechanisms derived from the aforementioned rule of thumb only apply to the undiluted substances, ie a gas concentration of 100% by volume is assumed.

Now the use of gas measuring systems is used to detect unwanted substances even at very low concentrations. In explosion protection, the concentration ranges are less than 5% by volume and, in the case of toxic gases, much lower in the ppm range.

Gas mixtures with such a low concentration no longer differ significantly from air in their specific gravity. Their spread is therefore no longer determined by the up or down of the gas but by other flow influences, such as wind or thermal buoyancy.

In particular, as often assumed erroneously, a mixture of gas and air no longer separates after mixing has taken place (Figure 1). This effect, as it is known for example from water / oil mixtures, does not occur with gases.

Figure 2 illustrates the situation in general. From a leak, pure gas that is lighter than air escapes into the environment. Initially, the buoyancy prevails and the gas cloud rises. By swirling and diffusion, the gas is mixed with the air.

As the buoyancy is diminished more and more, the flow directed here underlays and ultimately carries the gas with it. In the situation shown, the gas warning device installed in position A according to the rule of thumb would not recognize the release of gas at all or only late.

In this case, the arrangement at position B, if necessary in combination with lowered alarm thresholds, to account for the greater dilution, certainly makes more sense. If the potential sources of release can be further limited, the alternative is to attach the sensor in its vicinity (position C).

Figure 2: Example of the spread of a gas cloud.

Case 1: Rule of thumb is the worse solution

Situation: At a workplace within a larger laboratory space, hydrogen is used, which is taken from a compressed gas cylinder. Leaks from the bottle or the tubing of the experimental setups should be monitored with a gas measuring system. Rule of thumb: The transmitter should be installed at ceiling height. Better solution: The transmitter is only slightly above the workplace as centrally as possible.Reason: In the event of a leak, pure hydrogen is released, which initially also rises. At the same time, however, it mixes with the air in the room, decreasing buoyancy and concentration. The transmitter at ceiling height reached in comparison to the transmitter above the workplace hydrogen-containing mixture delayed and additionally the alarm threshold is reached later.

Case 2: Rule of thumb is dangerous

Situation: In a production hall, leakages from a pipeline network for city gas (methane) installed near the ground are to be monitored by means of a gas measuring system. Rule of thumb: The transmitters should be installed at ceiling height. Better solution: First, the flow conditions in the room must be known. The transmitters are installed where a mixing of the room air from the ground is ensured.Reason: In contrast to case 1, the outlet source can no longer be confined spatially. The released city gas must mix with the room air and reach with this one or more of the installed transmitters. In production halls, however, due to temperature differences, especially in the ceiling area, strong currents or even air stratifications are formed. In the worst case, the city gas / air mixture would not reach the transmitters installed in the ceiling area.

Case 3: Rule of thumb is reasonable

Situation: In a solvent storage container or leaking can fall. The liquids will usually collect on the ground and evaporate there. The vapors are heavier than air. The gas measuring system should report the occurrence of vapors as quickly as possible. Rule of thumb: The transmitters are to be installed near the ground.Better solution: A forced ventilation is required in such warehouses. The resulting flow conditions in the floor area should also be taken into account during installation.Ground: The solvent vapors form directly from the "liquid puddle" and usually mix only slowly with the room air, if there is no strong air movement directly on the floor. So it forms a slow-growing cloud of vapor near the ground. The transmitter is therefore installed correctly at the lowest possible position.

The cases listed here represent only a tiny fraction of the constellations that appear in practice. They should not be transferred to similar but not identical applications without further ado.

You can find help in the guidelines for the use of flammable gas warning devices (European standard EN 50073) and toxic gases (EN 45544-4) and the BGI 518 and BGI 836 professional association information.

Of course, the staff of ExTox is always happy to assist you. 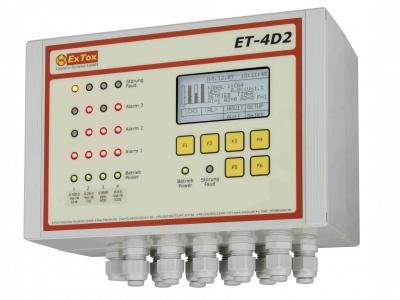 ExTox Gasmess-Systeme GmbH
ExTox GAS ALERT CENTER ET-4D2
The ET-4D2 is the ideal choice for tightly limited measurement tasks where the focus is on reliable warning of dangers while maintaining a favorable cost level.
To the Product

ExTox Gasmess-Systeme GmbH
ExTox GAS ALERT CENTER ET-4D2
The ET-4D2 is the ideal choice for tightly limited measurement tasks where the focus is on reliable warning of dangers while maintaining a favorable cost level.
To the Product
Image 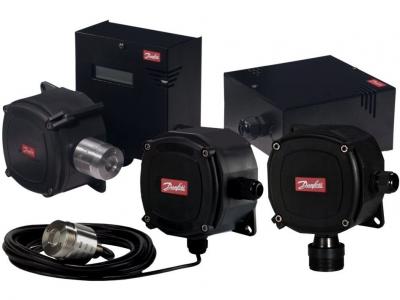 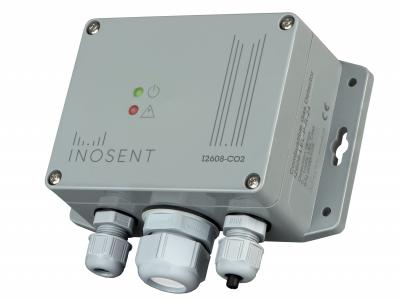 INOSENT GASWARNTECHNIK AG
INOSENT STANDALONE GAS DETECTOR «EASY»
The product EASY line is as simple as it is ingenious: Here, the Standalone sensor also becomes the control unit. This is a simple, high-quality compact solution for small plants.
To the Product
Image 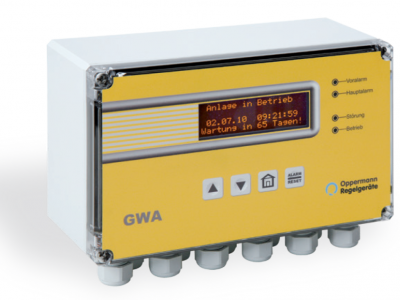 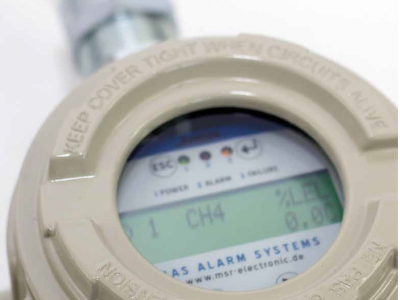